“If solutions within the system are so impossible to find, then maybe we should change the system itself.”

This is a good place in the textbook to delve into the advantages of incumbency in congressional races. Remember, an incumbent is a current officeholder who is seeking to be reelected to that office. Incumbent congressmen have excellent odds of being reelected. This is especially true of Representatives. As the Center for Responsive Politics put it, “Few things in life are more predictable than the chances of an incumbent member of the U.S. House of Representatives winning reelection.” In the past twenty years, the lowest reelection rate for the House of Representatives was 85 percent, and the mean reelection rate is more than 94 percent. Reelection rates in the U.S. Senate are a bit lower, but still impressive. In the past twenty years, the mean reelection rate for senators is 86 percent. (2) It is difficult to square these high reelection rates with Americans’ overall low opinion of Congress. Gallup tracking polls of Americans’ opinions of Congress over the past twenty years reveal that rarely do more than 25 percent of Americans approve of Congress and frequently their approval is down in the 14-20 percent range. In one recent Gallup survey, as few as 9 percent of people approved of the way Congress was handling its job. (3)

Combined with what we have learned about campaign finance, gerrymandering, and public opinion, the above information about congressional reelection rates raises an interesting set of questions.

These are good questions to discuss in class or with your friends. Take a look at these visual representations created by OpenSecrets.org of House and Senate reelection rates. 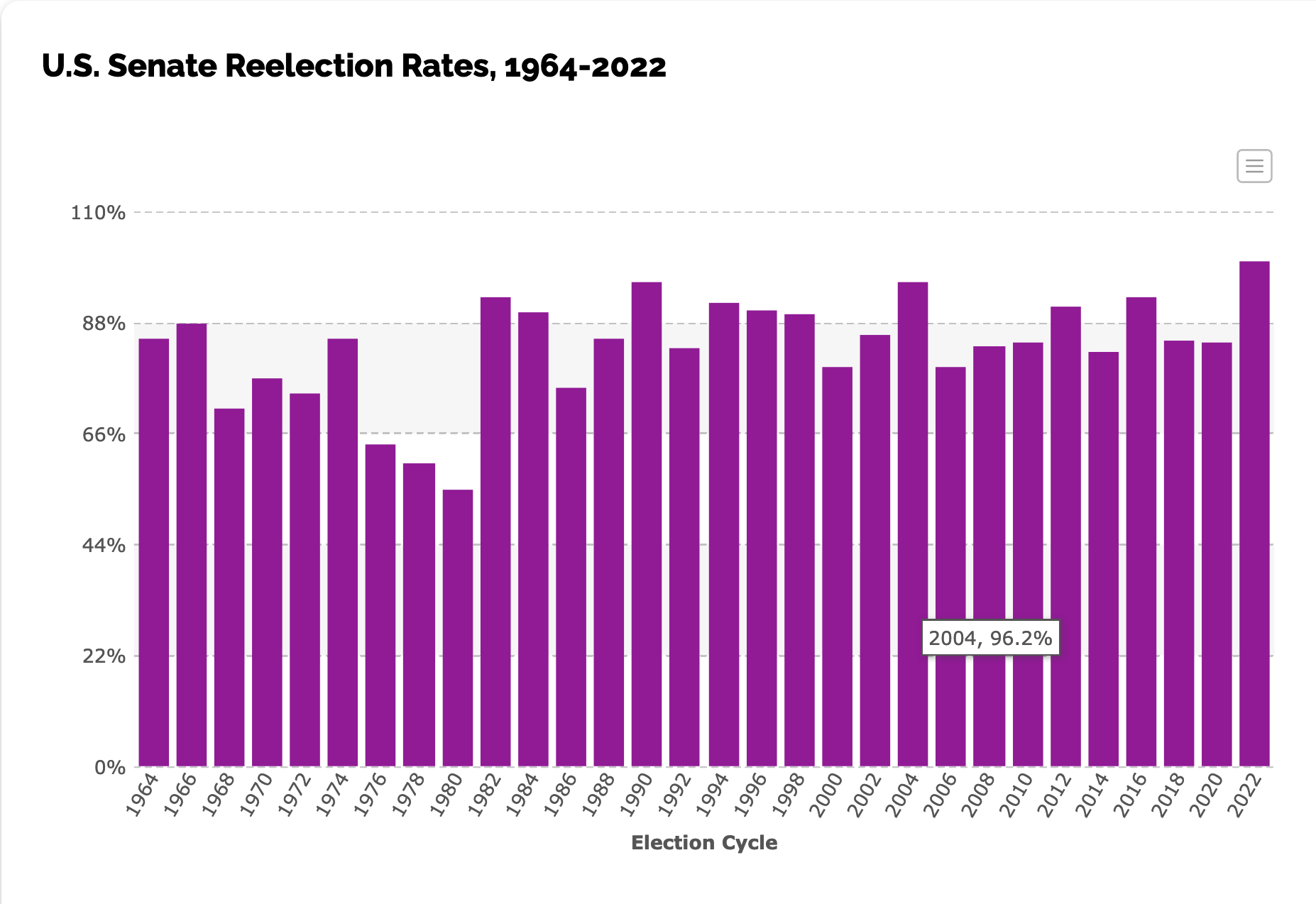 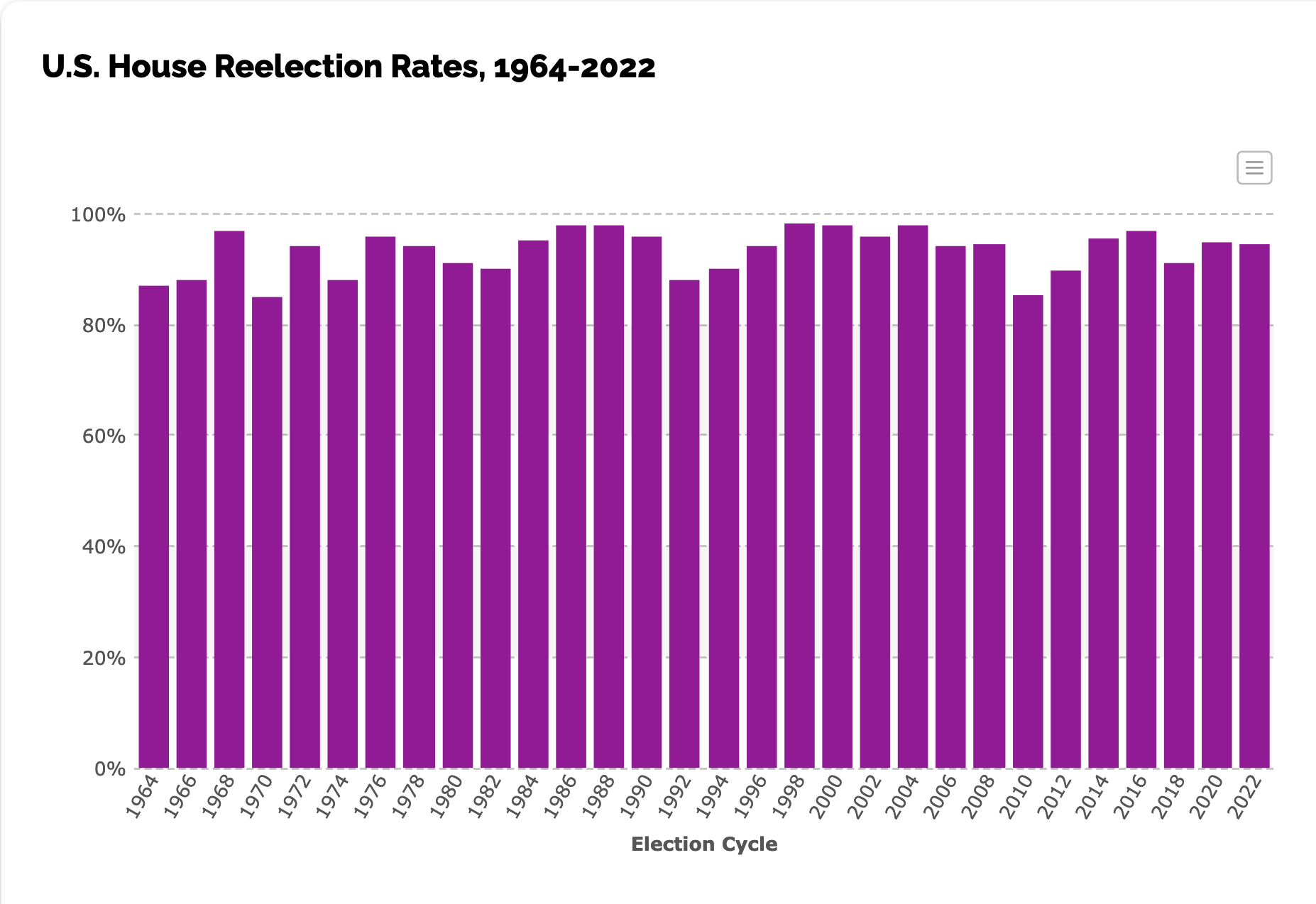 The Advantages of Incumbency

The high reelection rate for members of Congress may be due to several advantages that incumbents have over their challengers. You should be familiar with these advantages.

As we’ve seen in the chapter on campaign finance, incumbents often have a significant financial advantage over their challengers. Political Action Committees and wealthy individuals have numerous incentives to donate to incumbents. This has enormous implications for how a challenger might mount a campaign, since campaign commercials are expensive to produce, air time is expensive to purchase, effective websites that provide continually updated information and allow people to donate are expensive to set up and maintain, electoral consultants are expensive to hire, and so on. Sheila Krumholz from the Center for Responsive Politics said something in 2006 that is just as sobering when read today: “A challenger who spent less than a million dollars technically had zero chance of winning.” (5) More than half of House races feature one candidate spending at least $10 for every $1 spent by the challenger. We call these financially uncompetitive races. (6)

Another important factor is the power of seniority and experience. Almost invariably in campaigns that feature a congressional veteran against an upstart challenger, the incumbent stresses the importance of their seniority and experience in Washington. This is a powerful argument, for it is certainly true that seniority in Congress results in more power, better committee assignments, and greater ability to get bills passed—or greater ability to stop unfavorable bills. All this can translate into a larger voice for the state or district being represented by the incumbent. In the unlikely event that the challenger wins, they are going to be a freshman with little experience and no seniority. Of course, all of this assumes that the incumbent’s seniority and experience is actually being used to serve their constituents, as opposed to serving the interests of their financial backers. However, most congressional members have little difficulty spotlighting their positive-bills sponsorship—even if they never become law—or the bacon they’ve brought home to their state.

We’ve already talked about gerrymandering in a previous chapter, so we won’t go over the details here. Nevertheless, we need to recognize the role of gerrymandering in promoting the reelection rates of Representatives—but not Senators, for the Senate’s districts are fixed by state boundaries. Essentially what we have in recent House reapportionment schemes are majority parties in state legislatures drawing boundaries that favor members of their own party. A direct result of this is the decline of competitive House seats. Many House races are uncompetitive because of the incumbent’s financial advantages and because many districts have been gerrymandered to produce safe seats for one party or the other. A safe seat is one that is securely in the hands of one party as long as that party puts forward a reasonable candidate. Candidates in safe seats often win with 67 percent or more of the vote in the district. Going into the 2022 congressional elections, just 6 percent of the House races were expected to be competitive. (7)

Incumbents benefit greatly from name recognition and positive media coverage. Incumbents usually enjoy a name recognition advantage over their challengers. When this is the case, the challenger has to spend considerable money—which they probably don’t have—trying to build up name recognition in the state or district. Any incumbent who manages to stay out of scandal is virtually guaranteed positive coverage in the local media. This is especially true of local television coverage, which tends to focus on staged events at which the incumbent appears at events such as a local conference on aging, a local pro-am golf tournament, or a construction ground-breaking for which the incumbent helped secure the funds. Rarely does local media focus on how incumbents vote on key issues and how those votes affect real people.

Representatives and senators are given allowances every year to cover their expenses. Representatives have a Members’ Representational Allowance and Senators have an Office Personnel and Office Expense Account. (8) Generally speaking, these allowances vary from one congressman to the next based on how far their district is from Washington, rent in their district, and so forth. They use this money to hire staff in both their Washington and their local district or state office. Congressional staff spend much time on constituent service, which refers to troubleshooting and problem solving for their constituents. By being in a position to solve problems for their constituents, congressional members  generate positive feelings that challengers cannot. In addition, constituent-service benefits ripple through many people via word of mouth. This is an advantage for incumbents that most challengers cannot match.

Since the beginning of the republic, members of Congress have enjoyed the franking privilege, meaning that they are allowed to send mail for free to their constituents. The first Congress implemented this rule and based it on a practice that had originated in the British Parliament over a hundred years before the American Revolution. Members of Congress are never allowed to use the privilege for overt campaign literature or allowed to send such mail within ninety days of an election, but the simple ability to send direct mail touting the incumbent’s congressional activities throughout most of their term is definitely an advantage.

The incumbent advantage is not something that can be resolved in our current system. Indeed, it wouldn’t even be considered a problem if we could be confident that our Representatives and Senators were acting in the voters’ interest instead of serving the corporations and the small sliver of the electorate that can afford to donate mounds of money to their campaigns. Incumbent congressmen have little incentive to change a system that makes it so easy for them to stay in office.

What if we thought way out of the box when it came to our legislative bodies? Two interesting possibilities come to mind. The first would center on the idea of sortition. Political writer and intellectual David Van Reybrouck spelled out this possibility in his book with the intriguing title Against Elections: The Case for Democracy. (9) Sortition refers to the drawing of lots—where we get the term lottery—and so would mean selecting our members of Congress by some sort of random process that resembled a lottery. In ancient Athens, magistrates, members of the Boule (council), and jurists were chosen via sortition. Why couldn’t we do the same for representatives and senators? Set some basic qualifications, allow people to indicate on their tax forms whether they would like to be eligible for the congressional lottery, and select people to fill nonrenewable terms. It would require a few supplementary changes, one of which would be a change in how congressional staff are chosen, for you’d want nonpartisan staff to help these citizen-legislators craft effective laws. Another recommended change would be to change the legal code to make interfering with the congressional lottery’s random nature a form of treason.

The second possibility would feature citizens’ assemblies and deliberative democracy. (10) A citizens’ assembly is just what it sounds like: a group of adult citizens chosen at random. What if every year we established a Citizens’ Assembly devoted to each of a few particular issues—e.g., automobile fuel standards, judicial appointments, and immigration reform this year and renewable energy, judicial appointments, and a national healthcare system next year, and so on. With the help of some nonpartisan facilitators, each Citizens’ Assembly would practice deliberative democracy, which is a nonadversarial, discussion-centric form of decision making that educates the citizens in the assembly and helps them reach decisions. More technically, political scientists Amy Gutmann and Dennis Thompson define deliberative democracy as “a form of government in which free and equal citizens and their representatives, justify decisions in a process in which they give one another reasons that are mutually acceptable and generally accessible, with the aim of reaching conclusions that are binding in the present on all citizens but open to challenge in the future.” It has several operating principles: