“Redistricting today has become the most insidious practice in American politics—a way .  .  . for our elected leaders to entrench themselves in 435 impregnable garrisons from which they can maintain political power while avoiding demographic realities.”

“History has shown that both major parties are perfectly willing to rig the electoral rules to benefit their own, and to draw the lines to punish opposing partisans.”

Gerrymandering has long been a problem in American politics. It stems from a few basic historical facts. One is that the Constitution mandates that the number of House seats a state receives be apportioned based on population. Another is the Apportionment Act of 1842, which requires that congressional districts be compact and contiguous, and that states with enough population be split into more than one single-member district. In the Permanent Apportionment Act of 1929, Congress stopped increasing the number of seats in the House of Representatives, legislatively fixing it at 435 seats. In Wesberry v. Sanders (1964) the Supreme Court ruled that House districts grossly unequal in population violated the Fourteenth Amendment’s equal protection clause. In 1967, Congress passed the Uniform Congressional District Act that mandated single-member House districts. Finally, every ten years the Census figures out how many people are in the United States and where they are living, forcing the reapportionment of the 435 House seats. Some states gain seats in the House of Representatives after reapportionment, and some states lose them. Each time that happens, the district boundaries are redrawn.

In 1812, state legislative supporters of Massachusetts Governor Elbridge Gerry created a salamander-like electoral district that slithered its way from Marblehead through Danvers and Lynnfield and up to Salisbury, Massachusetts. The district was lampooned in local papers as a gerrymander, and the name has stuck ever since, referring to any manipulation of election districts to serve the interests of one party or group over others. Gerrymandering has become a real problem in the House of Representatives in the last few decades, as political parties have been able to combine massive demographic databases with geographic information systems (GIS) software. These tools have allowed unprecedented levels of slicing and dicing of the electorate to suite political interests. Essentially, what we have in recent House reapportionment schemes are politicians choosing their voters rather than voters choosing their politicians. This has not been a problem in the Senate for the simple reason that Senate district boundaries don’t change—they are the state boundaries.

The Mechanics and Politics of Gerrymandering

Successful gerrymandering involves two main moves: packing and cracking. House districts need to be roughly equal in population, and in practice in a given state they tend to fluctuate within 10 percent of each other. Beyond that stipulation, the district’s geographic shape is open to all sorts of configurations. Who draws the lines? In most states, the politicians in the state legislature draw the boundaries. If the political majority in the state legislature wants to advantage their party and disadvantage their opponents in federal House races, they will pack and crack voters in just the right ways. Packing involves “the practice of drawing particular districts in such a way as to ensure that another party’s candidate wins that seat by a tremendous margin.” The party doing the gerrymandering wants to concede this district and pack as many of the other party’s supporters in there as possible. This will make neighboring districts easier to win for the party doing the gerrymandering. Cracking involves “drawing districts in such a way as to divide a concentration of voter-specific types across several districts such that they are a minority in each one, with practically no hope of achieving representation in any of the districts.” The party doing the gerrymandering seeks to spread the opposing party’s supporters across the remaining districts, hoping to dilute their electoral weight. (3) 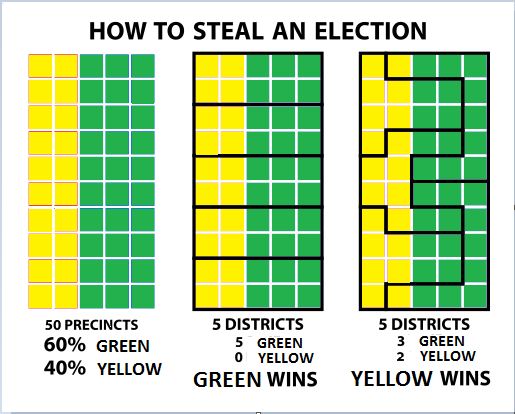 Historically, gerrymandering has been a tool used by both political parties in federal House races and state legislative races. Southern Democrats were famous for drawing districts that cracked black voters into multiple white-dominated districts. After passing the 1965 Voting Rights Act, a number of states practiced “affirmative gerrymandering,” or designed districts intended to elect members of racial minorities to the House. In Shaw v. Hunt (1993) and then Miller v. Johnson (1995) the Supreme Court decided that race could not be a predominant factor in creating election districts. As a state legislator, Barack Obama benefitted from a gerrymandered district in which his Hyde Park base was combined with wealthy supporters from Chicago’s Gold Coast. (4)

Since 2010, Republicans have been at the forefront of gerrymandering schemes, pursuing a concerted plan to use their state legislature dominance to draw districts to thwart democracy. (5) Republican operative Thomas Hofeller, known as “the master of the modern gerrymander,” made a career out of helping Republicans master demographics and the ever more sophisticated mapping tools that would help them draw state and federal electoral districts to benefit the Republican party. When he died in 2018, his files and emails became public. In one of his most famous consultations, Hofeller helped Republicans in North Carolina draw a House map where the district boundary split the campus of the nation’s largest historically black college, guaranteeing that it would be represented by two Republican congressmen. (6)

Gerrymandering’s impact is decidedly anti-democratic, no matter which party does it. The Center for American Progress studied gerrymandering’s impact after the 2010 Census and found that it resulted in the partisan shift of fifty-nine seats in twenty-two states in the 2012, 2014, and 2016 elections, with a net gain of nineteen seats for the Republicans. “The inescapable conclusion,” the authors wrote, “is that gerrymandering is effectively disenfranchising millions of Americans.” (7) A study of the 2018 election by Data for Progress estimated that due to partisan gerrymandering a net 2.6 percent of Democrats nationwide “ha[d] their votes cancelled out” by the way districts were drawn. (8)

The Supreme Court has thus far decided to sidestep the issue of partisan gerrymandering. In 2019, it reviewed a challenge to a Democratic gerrymander in Maryland and a challenge to a Republican gerrymander in North Carolina. In a narrow decision along ideological lines, the Court ruled that the issue was out of its hands. Writing for the five conservatives on the Court, Chief Justice John Roberts said in Rucho v. Common Cause (2019) that partisan gerrymandering presents “political questions beyond the reach of federal courts.”  In her blistering dissenting opinion, Justice Elena Kagan wrote:

“The partisan gerrymanders here debased and dishonored our democracy, turning upside-down the core American idea that all governmental power derives from the people. Of all the times to abandon the court’s duty to declare the law, this was not the one. The practices challenged in these cases imperil our system of government.” (9)

How can we address the issue of gerrymandering? Perhaps we could repeal the part of the Uniform Congressional District Act that requires single-member districts for the House of Representatives and move to multimember districts in which the top candidates all got elected. Even if we didn’t do that, what if we took the power to draw districts out of state legislators’ hands and gave it to independent commissions? Many states have already done so. What if all did? And what if those commissions relied primarily on computer algorithms to make the districts as compact and unbiased as possible? (10)