“The judicial power of the United States shall be vested in one Supreme Court, and in such inferior courts as the Congress may from time to time ordain and establish.”

Paths to the Supreme Court

Let’s flesh out three important things about the diagram. First, note that the three boxes on the right represent the state court system where most U.S. cases occur—e.g., people on trial for murder, rape, robbery, burglary, embezzlement, fraud, civil lawsuits, and so on. Cases can go straight through the state court system and on to the Supreme Court, but that is not a common path. The diagram is a little bit deceptive in this sense: the lightly shaded boxes on the right represent a large amount of work overall but represent a comparatively smaller source of Supreme Court cases.

Second, note the diagram’s two boxes in the middle with thick arrows. Most Supreme Court cases come up through the federal district courts and then through one of the twelve federal circuit courts of appeals. Other federal cases such as military cases and trade cases, etc. have their own paths, but again, the main route is depicted with the thick arrows.

The third thing we should note is that cases handled in state courts can sometimes raise questions that need to be adjudicated in federal courts. If a state defendant has exhausted their state options, they may seek a writ of habeus corpus from a federal court. Habeus corpus literally means “you have the body,” and refers to the court ordering state or federal authorities to bring a detained person to the court and show cause for the detention or incarceration. Obviously, the person is hoping the court will release them because of some violation of their federal rights. For example, the defendant may argue that their Fourth Amendment protections against unreasonable search and seizure were violated, or perhaps their Fifth and Fourteenth Amendment due process protections were violated.

The Supreme Court must take these cases when they arise but will often appoint a “special master” to hear the dispute and recommend a solution. Original jurisdiction cases are rare, but when they do occur, the Supreme Court behaves more like a trial court, collecting evidence, hearing testimony, and establishing facts. 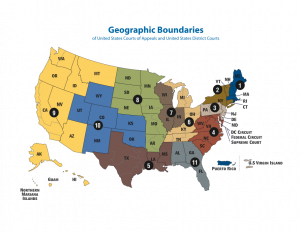 The district courts are grouped into twelve circuit courts of appeal, plus there is a court of appeals for the federal circuit that handles appeals from the U.S. Claims Court, the U.S. Court of International Trade, and other national-level courts. As you can see in the map, (3) cases arising out of federal district courts in Utah, Wyoming, Colorado, New Mexico, Kansas, and Oklahoma are appealed to the Tenth Circuit Court of Appeals, located in Denver, Colorado. There, a panel of three judges hear cases. The circuit courts are appellate courts—judges review the district courts’ decisions rather than develop new evidence or testimony. They are called “circuit” courts, by the way, because in earlier times, judges literally rode circuit via horseback or stage to remote areas to hear court appeals.